During this period of COVID-19, SVSS is operating in compliance with the pandemic restrictions defined by Placer County Parks Department.  Current restrictions preclude us from scheduling and conducting the contest schedule we enjoyed in 2019 and before.  Since July 2020, we have sponsored periodic Open Practices with constrained participation, face masks and social separation required.

Each Practice is comprised of a series of individual flights called rounds. Typically there are 4 – 6 rounds in each Practice. The objective of each round is to fly for a precise period of time. A timer accompanies the pilot with a stopwatch and measures the flight time from launch to landing. The best score is earned when the plane lands exactly at the end of the specified time. A spot landing earns extra points at the completion of the flight. Based upon where the nose of the plane comes to rest, landing points are determined from a graduated fabric landing tape.  In lieu of practice flying assigned tasks, members are also welcome to fun-fly with the understanding they should avoid hindering the pilots flying a task.

Be sure to check our club calendar for upcoming events. Don't be intimidated if you have never flown in a contest. Please come out and join us!!

Altitude Limited Electric Soaring, or ALES, is an electric man-on-man contest format. There are typically four rounds each being 10 minutes long. Similar to TD, a landing tape is used for award landing points. The main difference in ALES is the use of an on-board electronic “limiter” that cuts power to the motor after 30 seconds of run-time or when the plane has reached a preset altitude.

F5J is another electric man-on-man contest format similar to ALES in some respects but very different in others. In bigger F5J contests there are 10 minute qualifying rounds followed by 15 minute flyoff rounds. Unlike ALES where everyone launches to the same height, in F5J you get a penalty that increases with your launch height. So there is an increased emphasis on thermaling skills and less on landings. 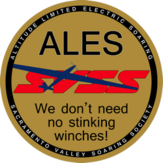 Thermal duration, or TD, were flown long before electric planes came on the scene. TD planes were catapulted into the air using a rubber bungee. Later, the development of an electric winch system replaced the bungee. While the basic concept of both TD and electric contests is similar (launch, fly and land) TD does not require multiple pilots to all launch at the same time. The times for each round can vary as can the landing tasks.